The COMISS Medal is the highest award given by the Network on Ministry in Specialized Settings. The first recipient, in 1988, was Henri Nouwen, who received the award at Dialogue 88 in Minneapolis. The purpose of the medal is to recognize individuals who have made significant contributions to the international spiritual and pastoral care and counseling movement – to ministry in specialized settings. 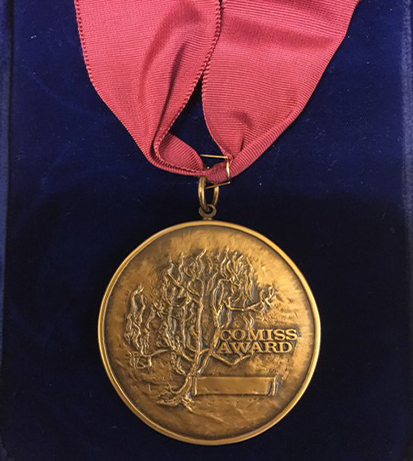 The original casting was for 24 medals, at a cost of $500 each. The medal is held by a red ribbon, which was to hang from the recipient’s neck like the Nobel Prize. He was chosen because of his reputation and his interest in translating the themes of pastoral care. The medallion was featured in a presentation at the Smithsonian where the artist created two other medallions in honor of air-space programs.